The latest version of Virtual DJ has just been released, and it brings a slick, updated layout, Beatport Link, Advanced Harmonic Mixing and the Event Scheduler that lets you program music, playlists, image slideshows and even DJ idents / samples and voiceovers.

Virtual DJ 2020 has just been released. It’s the latest version of Virtual DJ and it builds upon the features set of Virtual DJ 2018 (and Virtual DJ 8 before it) by adding a slick new layout that’s easily customisable and looks a bit more muted and “pro”. It also brings Advanced Harmonic Mixing, which lets the software automatically match the keys of two or more tracks if compatible musical keys are found within +1/-1 semitones of the base keys. Beatport Link streaming also makes an appearance and sits alongside a range of media streaming options in Virtual DJ 2020 including iDJ Pool, Deezer, and SoundCloud.

Finally, an Event Scheduler has also been added that lets you sequence music, videos, image slideshows and even DJ idents / stingers and voiceovers which Virtual DJ 2020 can execute automatically to your time preference.

The biggest change here is the way the software looks. As a DJ app, Virtual DJ has been stable for a while now with a powerful feature set (just two of the reasons why it’s popular with mobile and pro DJs), but one of the things that haters keep coming back to is the interface – some say it’s not “pro” looking enough (no doubt thanks to the hundreds if not thousands of user-generated skins that range from tasteful to tacky). 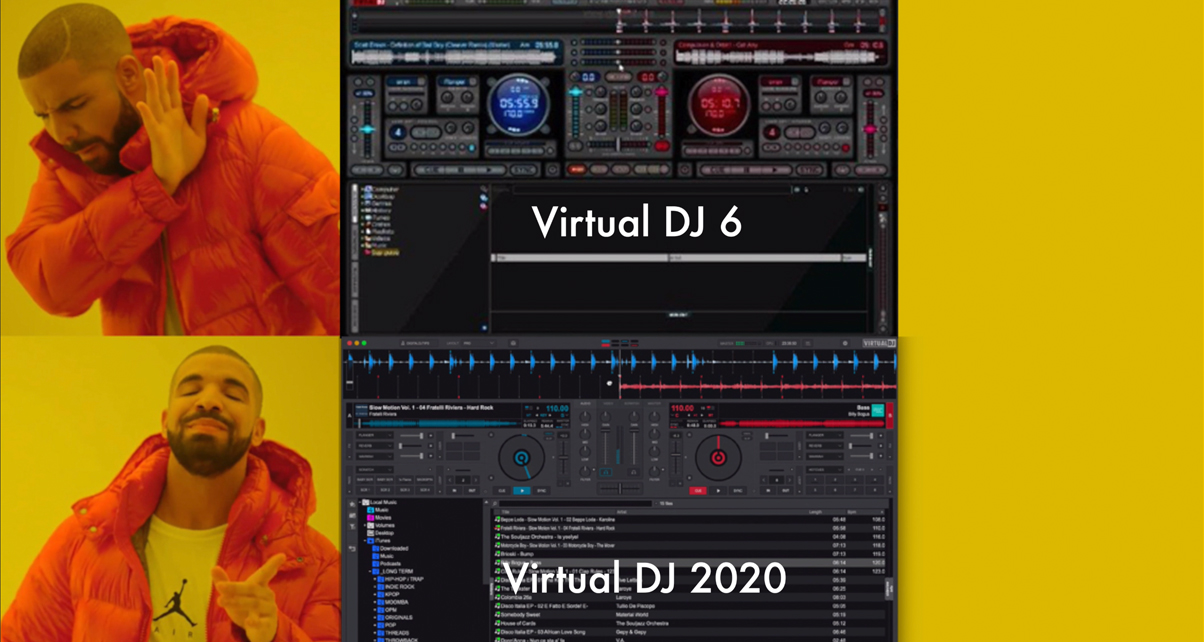 With this update, Atomix Productions put its foot down and basically said “OK then, here’s our take on a pro interface that looks great”, and what’s cool about it is that you get to tweak it too using a dropdown menu: you can change the way waveforms look, their position onscreen, whether you want rotary knobs or sliders for the mixer, and you can even engage a Dark colourway that will look great in even the dimmest of DJ booths. These changes to the interface alone make Virtual DJ 2020 worth checking out, especially if you’ve never used it before.

Advanced Harmonic Mixing and the Event Scheduler are welcome additions as well, and while the Event Scheduler lets you do basic sequencing stuff at the moment (eg go through an automix playlist, play a video, then play an air horn sample) we expect more features to be integrated as more mobile DJs use it and feed back to the company.

Don’t forget to check out our First Look video above, and watch out for our full review of it in the coming weeks.